I’m in a special category of martial artists- those of us who start because our kids are into it, then keep going because it’s fun. Kate began 5 years ago, after begging us to sign her up for probably 4 years. She became a black belt a year ago- she’s not in a big hurry to get her 2nd degree, but she hasn’t quit, either.

I started because both kids were taking taekwondo, and I would sit in the gallery, knitting and watching them kick stuff. Our school, Oriental Moo Do School of Colorado, transitions from a kids’ class, “The Dragons” to a family class, “Adult Basics” (maybe not such a creative name?) at around 12. The oldest you can be a Dragon is 13, and the youngest you can join the Family Class is age 9.  I was facing the prospect of Will being in the dragon class at 5:30, then Kate doing the family class at 6:30, and me never having any time to exercise.

I had a plan- both kids could move to family at 6:30, and I’d join as a white belt, and we’d have family time, and I would get out of those chairs in the gallery, and I could kick stuff, too.

It totally worked. Except it didn’t. Will wasn’t having any fun- the Dragons played a lot of dodge ball and freeze tag, and the adult class didn’t. He practiced about one more quarter, earned a brown belt and retired from martial arts.

Kate and I still enjoy it together- I knew it would be great exercise, but it is surprisingly fun. I know, you ask, how could it be fun without dodge ball? But we wrestle occasionally, and play with nun chucks and bow staffs, and you know, kick stuff. Being out and social with fun people also makes it fun- there is a good mix of ages who attend regularly, other parents as well as teens and people in their 20’s.

Taekwondo is also really good for my brain.

Movement is good for circulation, which is good for the brain, obviously, but there is also a lot of learning, which sets martial arts apart from say, spending the same amount of time per week on a stationary bike. We learn self-defense moves and memorize Korean terms. I have to learn and retain forms, which are complex patterns of kicks and punches. I had a test on Friday, and I had to be able to perform 15 different choreographed sets of blocks, kicks, punches and strikes. All of them different, but similar enough to be confusing. You don’t get that from a treadmill.

At my test on Friday, I had to break 2 boards, and I chose a jumping front kick and an axe kick (the most carefully pronounced kick in the dojang). I practiced, and I was nervous, but I was pretty sure I could do it. I was the lowest ranking person at my test, so I had the dubious honor of going first, and the black belts in charge selected 1 inch thick pine boards for me. Not nominal 1 inch, like at the lumber yard, where they are really only 3/4 of an inch thick, but actually 1 inch thick hunks of wood.  I tried.  My aim was pretty good, my technique was pretty good, my foot speed was a little slow (how do you improve foot speed? it’s my holy grail, now) and I just couldn’t crack the 1 inch board.  They switched it out to thinner ones, and I managed to break a board with each kick.  We got supper at Chipotle, then I went home and spent some quality time with an ice pack.

So, kicking stuff is fun, even if it is bad for toes, it is good for brains. 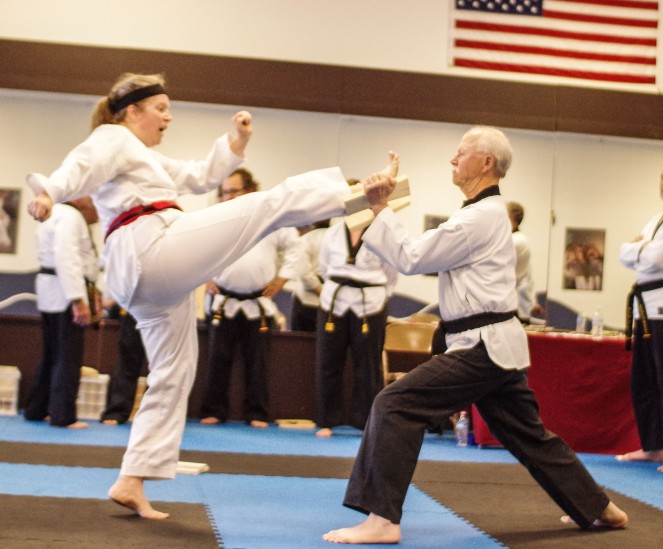 Welcome to the rough draft of my brain. Well, second draft. Most photos here are by me, other than the really good ones, which were taken by my husband.
Join 285 other subscribers

Where can you take my class?