After taekwondo family class one evening last fall, Kate and I went to King Soopers to get sushi (I know, I know, grocery store sushi…terrible) and a man saw us in our uniforms, there outside the store, in the dusk. ”Are you above brown?” he asked.

“Huh?” I totally couldn’t understand him- I thought he was randomly asking if I was above ground, which, obviously, I was.  So was he. Religious nut, maybe? Some kind of nut.

“Are you above brown?” he repeated.

You know how someone says something completely unintelligible, and instead of explaining it, they just say it louder and slower. Yeah, it was like that. Kate finally figured out he was referring to our martial arts uniforms, and in the dusk couldn’t tell what ranks we were. At the time, Kate had become a black belt, and I was red, which in our school, is “above brown.” Also above ground. We walked quickly past the nut as he told us he used to do Karate. We just didn’t want to engage in the conversation with a stranger about our ranks, and the difference between Karate and Taekwondo. Part of self defense is not engaging with random strangers in the dark, right?

When Kate and I talked about it later, we concluded he had probably quit his martial arts practice as a brown belt, and so that was his benchmark- it mattered to him more to know if we were above or  below where he had quit, than what our actual ranks were. It makes me think about what ranks mean, what do they symbolize and why.

I talk about Kate having become a black belt at that time rather than “getting” a black belt, or even earning one. When I talk about my own path in Martial Arts, I am careful to use the word becoming, as well. Symbols are important, and the black belt symbolizes something in American culture  Partly it is that the person with the black belt hasn’t quit,  has kept going through difficulties and distractions. It signifies an expertise and skill that many aspire to, but very few accomplish. It symbolizes what the person who has earned the black belt has held on to, the tenets of Taekwondo.

The Five Tenets of Taekwondo

Tenets mean something to hold on to, a belief held in common. The five tenets of taekwondo are things we aspire to, as well as foundations for daily living. The root word comes from Latin, meaning literally to hold in  your hand, not just an idea, but a tool, or a weapon. I practice Yoga as well, and we have the warrior series of poses, balancing strength with flexibility. There is a battle being waged against gravity, against fatigue, a battle of the self versus the self. All of the bones, muscles ligaments and breath working together to support the body in this “battle.” The most important tool is the breath, it all comes back to the breath, that is the foundation, the tenet.

In taekwondo, the tools we have to hold on to are courtesy, integrity, self control, perseverance and indomitable spirit. We continue to return to them when learning, practicing and teaching.

I have gone back and forth about whether these tenets are hierarchical, meaning that in order to get to the highest level, indomitable spirit, you have to have a solid foundation, like courtesy and self control.  Then I learned about a old form of roof building, a vernacular style in parts of Asia,  called a reciprocal roof. This creates  a self-supporting structure where each roof beam supports all the other roof beams- the forces are balanced and the roof can support a tremendous amount of weight. This seems like an excellent metaphor for the five tenets- each one holds up the other, and is supported by the others in turn, helping support the learning, practicing and teaching of taekwondo. The growth of the individual is supported by the community of the dojang, which in turn is supported by the strength of each individual.

The First Tenet of Taekwondo: Courtesy

I first came to Taekwondo through my children. My daughter was interested in martial arts, and we enrolled her and my son. I would attend their classes and watch, knitting on the sidelines.

When I first started observing my kids in class at Oriental Moodo School of Colorado, I was struck by the courtesy being taught and modeled, by everyone from the adult leaders of the class, to the teen assistants, to the preteen color belts . It seemed ironic that prior to kicking someone, you would bow, and shake her hand, and call her ma’am. Now, I see that it isn’t ironic at all, it makes sense to help kids find common ground, so that what seems combative can become productive. The structures of courtesy help sparring and training become a game where both players win, both players come away stronger and happier

Conflict can be scary- at work and in the King Soopers parking lot, with family and employers. It is also inevitable. No one can agree all the time, about everything. The lessons of courtesy help us deal with that conflict head on, rather than avoiding it. One of the reasons my daughter was interested in martial arts was because she was coming into conflict with her peers at school. She learned skills on the mat that helped her off the mat. 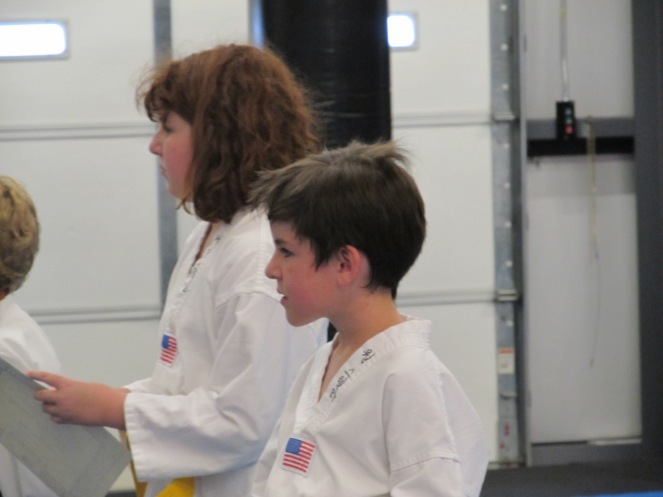 After observing class for 2 years, I decided to join, and begin practicing taekwondo myself, and began discovering the same skills that helped me be courteous when someone was attempting to kick me in the head helped me at work. I teach  English as a Second Language in a middle school, and there are days when I feel embattled. I sometimes think that I am practicing “emotional hapkido” at my school when colleagues, parents or students come at me. I can courteously redirect energy, so that all of the participants in the interaction come away stronger and happier. This hasn’t happened overnight, but as I have grown in Taekwondo, I have become stronger at work as well. My learning in the dojang has spread into my life outside of the dojang.

Tune in next week, for more musings about how yoga relates to taekwondo, how taekwondo relates to life, and how it all comes back to grocery store sushi.

Welcome to the rough draft of my brain. Well, second draft. Most photos here are by me, other than the really good ones, which were taken by my husband.
Join 285 other subscribers

Where can you take my class?